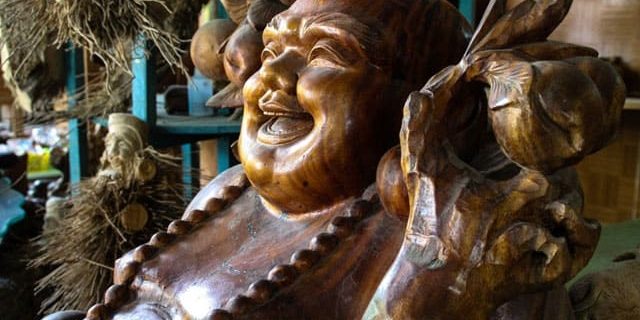 Kim Bong Carpentry Village is located on Cam Kim Commune, Hoi An, Quang Nam. The people originated from the north of Vietnam and village was formed in the late 15th century. It is well known for its carpentry. Artisans work on furniture and houses across the country, from special buildings in Ha Noi (the current capital) to Hue Citadel (previous capital),  royal tombs and most of the architectural projects in Hoi An.

1. What is the Kim Bong Carpentry Village?

It was founded in the 15th century. In the late 16th and early 17th century, it developed vigorously and established village with three groups: ancient architectural construction, civil wooden furniture and shipbuilding.

It is located in the right bank of Thu Bon River’s downstream which is convenient for raft transport, shipbuilding and launching. It also offers its products under merchant ships to countries around the world. East Kim Bong Carpentry Village specializes on shipbuilding and West Kim Bong concentrates on wood carvings and most product designs have been existing for decades. Most of the architectural projects in Hoi An ancient town were constructed by Kim Bong Villagers.

2. Why is Kim Bong Village special?

The village has retained over 600 years old. It has been a trademark of Hoi An tourism on the woodwork.

The biggest difference of products in Kim Bong carpentry village compared to other traditional villages is the rustic feature. Even if having painted or polished, they are also retain the natural wood color. Kim Bong carpentry style is a great combination of Cham Kingdom, Japan, China and the talented hands of craftsmen in Vietnam.

When tourists set foot on this land, they will hear the sounds of chiseling, drilling and cutting resounding out from both sides of Thu Bon River. The sound has become an indispensable part of the life of Kim Bong.

When tourists visit to Kim Bong carpentry village, they can visit the carpentry workshop and directly admire the sculptural features of talented artisans. They can also easily find unique products such as the censer carved 1000 dragons thanks to images of bamboo which was shown off on the occasion of the 1000-year Thang Long in Hanoi, or Japanese Covered Bridge in Hoi An old town. So, Kim Bong Carpentry Village has long become one of the most impressive attractions in Hoi An.

3. How to get to Kim Bong Carpentry Village?

From Hoi An, tourists must take a boat trip on Thu Bon River to visit Kim Bong Carpentry. It takes about 10 minutes to Kim Bong Village. There’s no entrance fee to the Kim Bong village.

Should you have any questions or need assistance in your travel plans feel free to contact us.