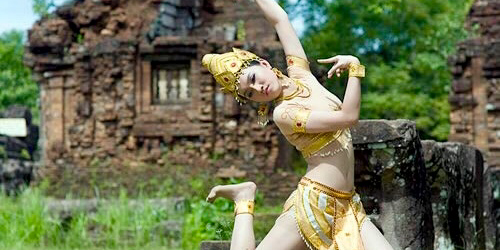 Located in narrow valley in Duy Phu Commune , Duy Xuyen district , Quang nam province . 70km southwest of Danang city , 20km away from the Tra Kieu citadel , and 40km away from the Hoi An ancient City.My Son Site is group of temple towerd of Cham people , imperial city during the Champa kingdom . An example of the intelligence and evolution of the ancient Cham era with its superb architectures and unique construction techniques has been preserved over generations to this day.With its great value , in December 1999 , the complex of My Son Champa towers has been recognised as a world heritage site by UNESCO.

08:00 Pick up hotel in Hoi An and depart for My Son Holy Land

09:30 My Son admire the mysterious beauty of the ancient temples in the morning and discover the beautiful ruins of the Champa kingdom built about 8 centuries ago.

Learn more about the Ancient Kingdom of Champa as you explore the abandoned and partially destroyed Hindu temples built between the 4th and 13th centuries AD.

It consists of several Champa temples, in a valley about two kilometers wide, surrounded by two mountains. This is where worship of the kings of the Champa dynasty, and also the burial place of the Champa princes and national heroes.

The guides will tell you about the history of the ancient ruins of the Champa kingdom with its history behind it and more than 70 buildings in the complex . Enjoy traditional Cham dance performances from local people and immerse yourself in wonderful views of the lush valleys and surrounding mountains.

13:45 Return to Hoi An and the tour ends at your hotel